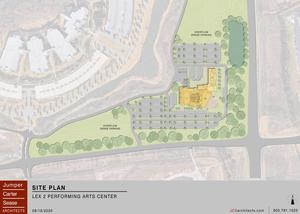 Construction on the performing arts center could begin as soon as spring 2021, with completion estimated in late summer or fall 2023

WEST COLUMBIA, SC -- The vision for Lexington Two’s much-anticipated performing arts center is coming to life, with renderings shared as part of a recent project update.

Lexington Two’s Board of Trustees viewed preliminary design plans from Jumper Carter Sease Architects at its recent August board meeting. The performing arts center will be built on just over 28 acres at 12th Street Extension and Saxe Gotha Road, adjacent to Dominion Energy’s offices in Cayce.

Lexington Two’s performing arts center will offer the district a large, state-of-the-art venue and full working stage for performances,  special events, and district-wide occasions -- something many schools now lack -- along with space for educational and business conferences. There will be about 2,000 seats in the main auditorium, along with several smaller multifunctional spaces that can serve as meeting spaces and support areas for performances. The district office will move into the center, a cost-saving measure that will allow the space to be continuously occupied. It will share a lobby space with the center that can be opened up for board meetings and larger district events.

The site, offering high visibility from Interstate 77 and the 12th Street Extension and Saxe Gotha corridors, is accessible to the district’s schools -- including three roughly a mile from the site. It is also in an area of Cayce attracting new growth, including a recently announced project that is expected to bring homes, apartments, office and retail space.

The performing arts center is the final project in a $225 million construction plan approved by voters in 2014 that has added three schools and upgraded others across the district.

Construction on the performing arts center could begin as soon as spring 2021, with completion estimated in late summer or fall 2023.

Watch the annual Report to the People, with a closer look at the $225 million construction plan, by clicking here.